Cuppacumbalong means 'meeting of the waters' and lies at the junction of the Murrumbidgee and Gudgenby rivers. This the view west of the homestead.

Walking down the stairs toward the river (below) you join the De Salis Track which takes you upstream to the cemetery. The long heritage of developing arts and craft at this site has been revived when the Tharwa Valley Forge purchased Cuppacumbalong in 2017. A bladesmithing school currently operates with the opportunity to weld metal artworks (below) also popular. 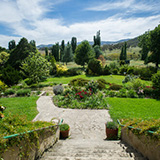 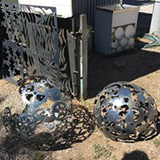 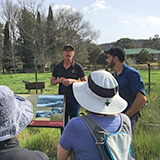 The first impression gained from Cuppacumbalong Homestead is that it is another of the stately 19th century homes built by wealthy pastoralists. In fact, the homestead was built in 1923. It is the third homestead built on the Cuppacumbalong land; the first was built in 1849 and the second in 1885. Both were located just too close to the Murrumbidgee River and were flooded out. The current homestead now stands on higher ground.

After being established by James Wright, it was bought by Leopold De Salis in 1855 and was noted for wool and magnificent draught horses. De Salis also had a political career spanning 24 years. One of the owners, Frank Snow bought the property in the early 1920s and it continued to produce merino sheep and Hereford cattle. Heritage-listed Cuppacumbalong was one of the largest remaining freehold rural properties in the late 1960s.

The owner prior to the current owners had the property since 2001 where it remained a private farm stay with annual openings to the public usually during the Heritage Festival.