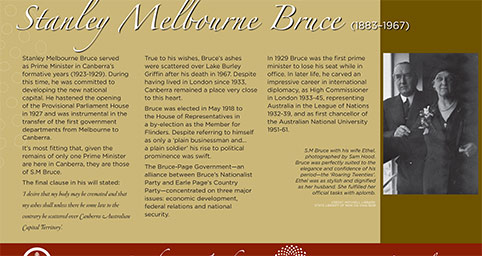 From Hall Cemetery, return east towards Canberra on the Barton Highway for about 9km. Turn right into Northbourne Avenue and follow the directions below.

From the Canberra and Region Visitors Centre parking area, you are at Commonwealth Park, so walk to the lake's edge and follow the R.G. Menzies Walk on Rond Terrace. 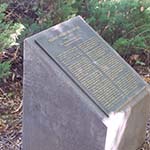 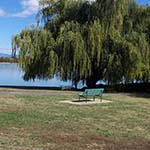 Commonwealth Park occupies 25.5 hectares on the northern shore of Lake Burley Griffin and has been designed as a place of public enjoyment. It has been progressively developed since 1964 to a plan prepared by prominent British landscape architect Dame Sylvia Crowe.

Track 4 terminates here at the plaque commemorating the only Prime Minister whose remains rest in Canberra. The final clause of Stanley Melbourne Bruce's will stated:

As Prime Minister, Stanley Melbourne Bruce was committed to developing the new national capital. During his term from 1923 to 1929, Bruce allocated funds to hasten construction of the provisional Parliament House and was instrumental in transferring the first government departments to the city.

Sir Robert Menzies was another Prime Minister who committed his government to the task of creating a capital worthy of the nation. The R.G. Menzies Walk stretches from Commonwealth Avenue Bridge to Kings Avenue Bridge along the northern shore of Lake Burley Griffin. Four plaques outlining Menzies' career and role in the development of Canberra are located along the path.

Location:
Rond Terrace within Commonwealth Park is at the southern base of Anzac Parade.

Time to get there:
30 minute drive from Hall Cemetery
10-15 minute walk from Visitors Centre