The residence of the Governor General has a long history prior to its current important role. It is open to the public only on special days. The lookout also has views of the Yarralumla Woolshed where Deucem Smith, the only Aboriginal in the Shearer's Hall of Fame, once sheared sheep. His son and daughter (below centre) attended the unveiling of the sign, with former Chief Minister Jon Stanhope, recounting their father's shearing feats. Another view to the west shows the Molonglo River and the Brindabella Mountains.

From St John’s Church turn right, back onto Constitution Avenue and left at the Coranderrk Street intersection. After the tunnel, turn left onto Lady Denman Drive. Follow this around the lake and across Scrivener Dam. The lookout is on the left.

From the Canberra Region Visitor Centre travel drive under Commonwealth Bridge on Barrine Drive, and turn right onto Albert Street, then back north on Commonwealth Avenue. Take the first exit onto Parkes Way west and after the tunnel turn left onto Lady Denman Drive. Stay on this road which will cross Scrivener Dam. On your left is the lookout. 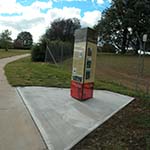 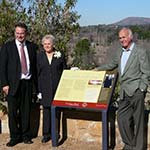 Were there links between the great pastoral estates and the making of Australia’s national capital? Yes indeed, and Yarralumla House is the most important of them. Once the most palatial homestead in the region, it is now the residence of the Governor General of Australia. Unlike the purpose-built Government Houses in the state capitals, the Governor General’s residence dates from an earlier era, linking the history of the Limestone Plains with Canberra.

Yarralumla’s first owner, Francis Mowatt, bought the land in 1833 and built a hunting lodge, but sold it in 1837 to Terence Aubrey Murray and Thomas Walker. The superb gardens – opened to visitors during spring – include a massive deodar cedar tree that probably dates from this time. Murray became the district’s first Member of Parliament when NSW gained self-government in 1856. His brother established a nearby property called Woden. Both Yarralumla and Woden homesteads still stand, and have suburban districts named after them.

Yarralumla and Duntroon were the two great pastoral properties of the Molonglo valley, and both were brought to their peak under the ownership of the Campbell family. Frederick Campbell, a grandson of Robert Campbell, bought Yarralumla in 1881. He extended the holding to 39,000 acres, shearing as many as 40,000 sheep, and built one of the finest pastoral properties in NSW. Trees were ringbarked, swamps drained, and when introduced rabbits arrived in plague proportions, Campbell enclosed the whole property in rabbit-proof fences.

The old homestead was gradually rebuilt with a three storey wing added in 1891. Further additions in brick included a library and billiard room in 1899-1901. The homestead became the district’s largest house, reaching a colossal 40 rooms. Not surprisingly, the Commonwealth resumed Yarralumla as a residence for visiting Members of Parliament, and Canberra’s first Cabinet meeting was held there in 1924. Campbell’s homestead now forms part of the Governor General’s official residence.

Turn to the second lookout for a reminder that this was once a pastoral station. Gaze over Yarralumla Creek to the Yarralumla Woolshed. The station complex included many service buildings, outstations and brick and slab cottages for the workers. This large woolshed, the most modern and largest in the district, was built in 1904 with 20 stands as well as shearers’ quarters, sheds and yards. As many as 400 red and yellow boxwood posts were cut in the area now known as Weston Creek and were used in the construction as well as galvanised iron.

There are still signs of rural landuse in this view, with agisted horses grazing near the shearing shed. The willows along the creek are another indication of early rural practices.  They are picturesque, but introduced willows have damaged the stream ecology.

Yarralumla Creek runs south down Woden Valley (on the left), once part of Yarralumla. When acquired by the Commonwealth, the valley was subdivided as Returned Soldiers Blocks. By contrast with Yarralumla, the blocks were only 1,000 to 1,350 acres in size. Some were too small to support a family, but many of these small farmers continued until the 1960s when the land was resumed by the government to build the suburbs of Woden.

Open Hours:
The lookout is open daily. The residence of the Governor General is only open on special open days.