From Duntroon Dairy return along Kelliher Drive and Sellheim Avenue, turning left into Constitution Avenue. Take the first left into Wendouree Drive after the traffic lights.

From the Canberra and Region Visitors Centre drive under Commonwealth Bridge on Barrine Drive, and turn right onto Albert Street, then back north on Commonwealth Avenue. In 500m take the second exit to Parkes Way east. In 1km turn left at the roundabout onto Anzac Parade, turning right at the first lights onto Constitution Avenue. Turn right into Wendouree Drive which goes under Parkes Way. 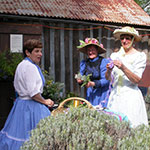 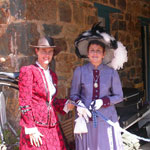 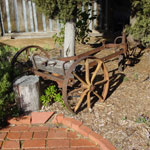 Most of the farmhouses in the Molonglo valley were both tiny and basic. Downriver from Duntroon Dairy you’ll discover one of them, an intriguing contrast to its setting in a well-groomed park. Blundell’s Cottage is the last small farmhouse standing in central Canberra. Like the dairy, it also has a connection to the Campbell family at Duntroon. Blundell’s Cottage was built for one of the many tenant farmers of Duntroon.

Campbell employed convicts as shepherds and labourers but preferred free immigrants who were more industrious workers. He was familiar with the tenant farmer system established in his native Scotland during the eighteenth century, and decided to run his Australian property along the same lines. Tenant farmers were provided a house and land in exchange for their labour.

The Campbells recruited Scottish farmers and brought them on Campbell and Company ships to Australia, encouraging them to settle with their families at Duntroon with offers of cottages and plots of land. The first immigrant farmers arrived in 1836 and were settled at key locations around the property above the flood level of the Molonglo River.

Eventually, 25 houses were built on Duntroon estate. This house was one of several stone rubble cottages provided for the workers, probably built by the estate stonemason George Rottenberry in 1859. Unlike the spacious Duntroon homestead the cottage had just four rooms, with two more rooms added in 1888. The building was roofed with timber shingles, later covered with iron. The verandah was also added later. You can see a detached slab timber structure, the kitchen, with an external brick oven built against the house wall.

William and Mary Ginn were the first to move in. William was Duntroon’s head ploughman, and also farmed 60 acres. George Blundell followed in 1874 with his new Scottish wife Flora. George was born on Duntroon, and worked there as a bullock driver. George and Flora raised eight children in the cottage and lived there for nearly 60 years, which is why it still bears their name. When the Commonwealth acquired Duntroon estate for the Federal Capital Territory in 1913, tenant farmers like the Blundells, who were tied to the land they rented, made no gains from the change. Blundell remained a tenant farmer, leasing nearby paddocks from the government. He lived in the cottage until his death in 1933.

The Oldfields, who were the third and last family to live in the cottage, sold eggs to a growing Canberra community. The small stone house witnessed the building of the national capital, planting of Commonwealth Park, and the spread of waters beyond the river banks with the filling of Lake Burley Griffin.

The building was to be demolished to prepare for the new lake in 1962, but was preserved instead. Blundell’s Cottage is now a hands-on museum operated by the National Capital Authority. Stuffed with furniture in the manner of nineteenth century homes, it is an engaging memorial to the small farming families who lived here long before Canberra.

Open Hours:
Currently closed for works and due to reopen next month (August 2018). Usually Saturday (except public holidays) 11:30am - 1:30pm