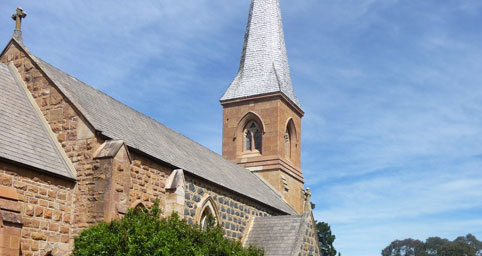 St John the Baptist Anglican Church at Reid is the oldest place of worship in the ACT. The interior (below left, courtesy of Robin Page) is well worth a visit. Check the opening times for the old schoolhouse also on site. (Photos courtesy of St John's Schoolhouse.)

From Blundells Cottage return to Constitution Avenue and turn left. Continue across Anzac Parade then turn right into the access road to St John’s Anglican Church.

From the Canberra Visitor Centre drive under Commonwealth Bridge on Barrine Drive, and turn right onto Albert Street, then back north on Commonwealth Avenue. Take the second exit in 500m onto Parkes Way east then take first turn left onto Coranderrk Street. Immediately at the lights turn right onto Constitution Avenue. St John's is 500m on the left. 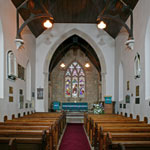 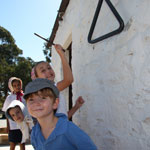 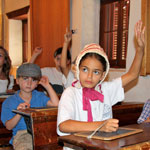 Another delightful rural scene opens as you walk through the lych gate of St John’s Church, a classic English village church. Anglicanism was the dominant faith of the British Empire, and this Anglican church was planted far from England by a landed gentry in the making. The site, overlooking the Molonglo River, was donated by the Campbell family together with half of the building costs in 1844. Local ‘bluestone’ and sandstone were used for the walls.

You can easily trace later stages of construction as the congregation grew. Edmund Blacket, a renowned colonial church architect, designed the tower and spire, which were added in 1878. The shingle-hung tower and spire became a landmark on the plains, seen in many views from Mt Ainslie. The tall trees around the church formed another landmark. Many were planted by Rev Pierce Galliard Smith, rector for 50 years.

The church has been a spiritual and social centre for more than 160 years, and will reveal many stories. Generations of worship, baptisms, marriages and funerals, classes and meetings have been conducted here. Plaques on the walls provide a testament to pioneering families; the east window is a memorial to Robert Campbell, and is one of the first stained-glass windows made in Australia. Many Limestone Plains residents lie buried in the graveyard. The Guise family vault dates from 1844 and seven descendants of the Campbell family lie within a hedged enclosure.

St John’s Church remains an active site of pilgrimage and worship, and its contemporary role as a spiritual sanctuary is also apparent through sites such as the Meditation Garden and the Columbarium within the graveyard. Parishioners come together for prayer, reflection, and music. The parish buildings house a number of communities, in particular St John’s Care – an Anglicare centre – which offers food and shelter to people in need. Church facilities are turned into relief centres during times of crisis, such as the Canberra bushfires in 2003.

The Campbells also sponsored construction of St John’s Schoolhouse. This was the first school and teacher’s residence built on the Limestone Plains in a time when education was neither compulsory nor free, and many working class migrants were illiterate. The school was intended to teach their children, and was a more humble building than the church. There was a single schoolroom and an attached two-roomed dwelling for the teacher, causing a crush for the large Abernethy family. The walls were rubbled stone and there was a shingle roof like that at Duntroon Dairy, later covered with galvanised iron. This was the district’s only school until 1880 when a free state school was opened. St John’s School operated from the 1840s until 1880, and again from 1895-1907, with enrolments ranging from 23 pupils in 1859 to 49 in 1865.

Patrick Curley, born at Duntroon, in the second generation of men employed there, attended St John’s School during the 1860s. He spoke with great respect of long time teacher Mr Abernethy. When Curley married Annie Tong, a servant at Duntroon House, they were given a ‘design’ cottage by the Campbells on the banks of the Molonglo River, later moving to Mugga Mugga, an outstation of Duntroon. Their first daughter Ada became a pupil at St John’s in the early 1900s.

Once, a bushfire roared through this little country school, and the children were saved a long walk by using the Duntroon Dairy while rebuilding was under way. Today, you can explore these stories inside the building, now St John’s Schoolhouse Museum, showing artefacts and photographs of the school, the church, and the district in the nineteenth and early twentieth centuries.