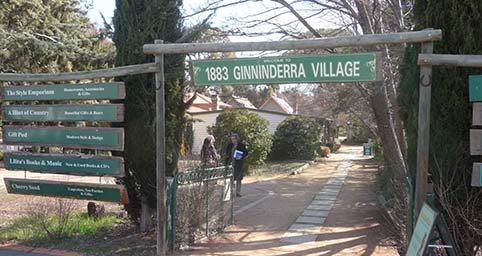 At the heart of the Gold Creek tourism complex is the historic village at Ginninderra. What is the link between Ginninderra, New Zealand and Holland? Find out from the sign (below left) on O'Hanlon Place at the large car park in front of Ginninderra Village. After attending classes in a tent for two years, children would have regarded the schoolhouse (below centre) as a great incentive to attend class. St Francis Roman Catholic Church (below right) is now an artist's studio. 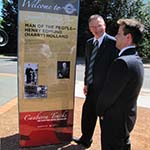 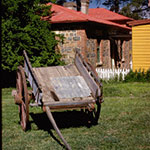 Ginninderra Village is at the core of the Gold Creek village complex, which was established in the early 1990s to incorporate the many shops, attractions and cafes under one brand.

The schoolhouse (1884) and the former St Francis Roman Catholic Church (1872) are all that remain of the thriving centre of the large Ginninderra district, which stretched from Mulligans Flat in the north, Murrumbidgee River to the west and North Canberra to its south.

Its establishment is linked to Palmerville and its demise with Hall, which became the 'official' village, much to Ginninderra residents' dismay.

There is no gold and no creek in the complex. Gold Creek was named after a race horse. Since the late 1970s, the tourist area has grown, attracting many visitors.

Time to get there:
30 minutes from Visitors Centre