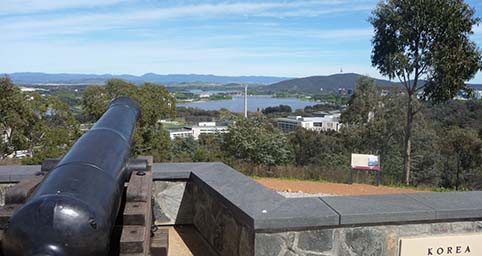 From Mt Ainslie, return down Mt Ainslie Drive and turn left onto Fairbairn Avenue. After the roundabout turn right through the ‘gun gates’ into Robert Campbell Road. Take the second left into General Bridges Drive. Far from their original role in Sydney Harbour defences, two 64 pounder guns at the summit form part of the Royal Australian Artillery National Memorial. The memorial’s stone outer wall symbolises the early forts defending the ports of the Australian colonies, which federated to form the Commonwealth of Australia.

From here you can see the Griffin Plan up close, looking towards the lake with Constitution Avenue as the base of the triangle joining the market centre of Civic to the military complex at Russell (immediately below). Across the lake, Barton has been developed as an office precinct, but the dominance of Parliament House is maintained, with every other building carefully kept below the height of Capital Hill. The overall impression is of a city submerged in the landscape.

You can clearly see the separation of functions in this design. The view to the south-east across Duntroon and the Molonglo River looks towards Fyshwick, Canberra’s main industrial area, where the street names provide a Cook’s tour of Australia’s industrial towns.

Canberra’s landscape setting and design is also evident in this view. The city’s location on the floodplain of the Molonglo River is evident, and the river can be seen beyond Scrivener’s Dam, which was built to create Lake Burley Griffin. You can also see the contrast between the natural grasslands of the Majura Valley and the ‘urban forest’ of Canberra as examples of the natural environment before and after the city’s development. The temperate natural grasslands of the Majura Valley have been modified by agriculture and other development such as the airport, but the valley still contains some of the best quality grassland in the ACT. The grasses are mainly wallaby grasses, with a small area of kangaroo grass. On the sides of the valley, trees become more common, merging into box woodland.

General Bridges’ grave is on Mt Pleasant. It is part of Track 4.