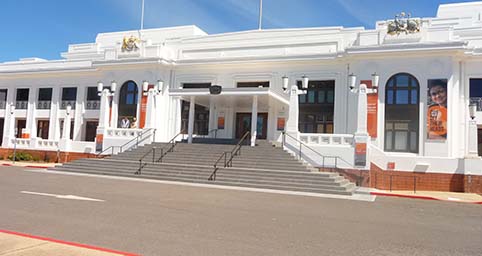 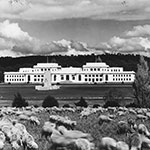 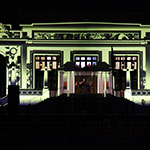 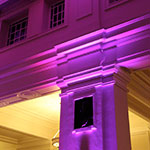 This 1940 photograph shows the prevalence of the pastoral industry in the young capital. (credit: National Library of Australia). During the Enlighten Festival each March projections onto the front of the building draw a large crowd. Special events and lighting inside are also part of this festival.

From Calthorpes’ House continue northwest on Mugga Way, turning right at the roundabout onto Melbourne Avenue. At the next lights turn right onto State Circle and right into Kings Avenue. At the second light turn left into King George Terrace.

From the Canberra and Region Visitors Centre continue south on Commonwealth Avenue, cross the bridge taking the first left then at the lights turn right into Langton Street. Finally turn left into King George Terrace.

The Duke of York opened this ‘Provisional’ Parliament House in 1927 when Canberra was still a small bush capital. Perhaps fittingly, a Nationalist/Country Party Coalition was in power with Stanley Bruce as Prime Minister. There were 112 politicians when Parliament moved into this new building. Today, they number 226 with 150 in the House of Representatives and 76 in the Senate.

Parliament House was Canberra’s reason for being and its main attraction. A 1930s brochure describes ‘its dazzling white standing out in bold relief against a background of mountains … set in magnificent gardens’, where more than 17,000 trees had already been planted. Built of brick and finished in white cement, with 182 rooms, ‘the House is a monument to national progress. Its luxurious appointments are a source of wonder to all who behold them.’

In May 2009 the Museum of Australian Democracy at Old Parliament House was launched. The museum features exhibitions, tours and programs that celebrate Australia’s Democracy.