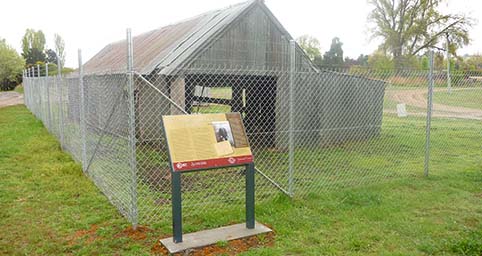 The granddaughter of the last blacksmith was interviewed and the sign tells of the sights, smells and sounds at the workshop. Works were completed in 2013 in conserving the building with the return of the bellows as the final act. Pictured below left are the old bellows. The bellows were removed and conserved by students at the Donald Horne Institute for Cultural Heritage at the nearby University of Canberra. The bellows are supported off the ground back in their original spot (central photo below). This historic return of the bellows was marked with an event (below right) at the 2013 Canberra and Region Heritage Festival. 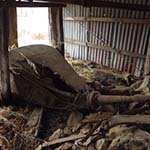 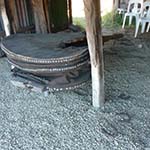 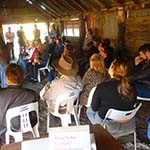 From Ginninderra Village continue east on the Barton Highway. The entrance is 200 metres from Gold Creek Road.

The blacksmith was an important person in 19th century Australia. He provided an essential service to the local community including shoeing horses, manufacturing small implements such as nails and bolts, and larger ones such as ploughs. He also repaired horse-drawn vehicles.

Built in about 1860, the Ginninderra Blacksmith's Workshop is the only building remaining in the ACT representing a village blacksmith. Others exist on properties. Situated on the Yass-Queanbeyan Road (now the Barton Highway) it would have also picked up passing trade.

The Blacksmith was also a focal point for social gatherings, especially in winter with the warmth generated by the forge. The presence of an Aboriginal glass artefact on site supports historical documentation that Aboriginal people were also attracted to the workshop.