Track 6 starts with a walk or cycle around Lake Ginninderra. There are many inlets that provide different facilities like playgrounds, picnic tables or shelters, barbeques and jetties. 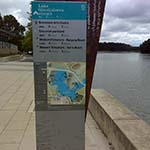 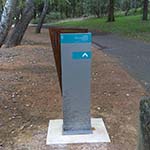 The natural character of Lake Ginninderra, its foreshores and associated conservation values are greatly valued by the Belconnen community.

The lake, constructed in 1974, was an important part of Canberra’s Y-Plan, which was developed in the late 1960s/ early 1970s. This model for city growth proposed a series of new town centres, each with its own open space system. As part of the Y-Plan, the building of the adjacent Belconnen Town Centre began in the late 1960s.

The lake was integral to the plan. It was formed through the construction of the Ginninderra Drive embankment across Ginninderra Creek. It has a surface area of 105 hectares and an average depth of 3.5 metres. The lake collects stormwater from a 9800 hectare catchment, with water quality monitored by health and environmental agencies.

Time to get there:
20 minutes from Visitors Centre