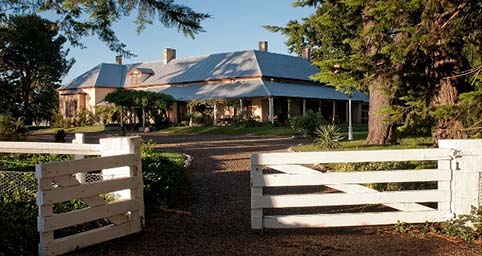 The Lanyon Homestead with its outbuildings and well maintained gardens is still part of a working property.

From Government House Lookout continue south on Lady Denman Drive and turn right onto the Cotter Road. Take the exit onto the Tuggeranong Parkway south and remain on this road for about 15 minutes. After passing the most southerly suburb of Banks, you will see the turn off to Lanyon on the right.

From the Canberra and Region Visitors Centre continue south on Commonwealth Avenue, cross over the bridge, around Parliament House then take the left turn after the Royal Australian Mint exit onto the Cotter Road overpass. Turn left onto Tuggeranong Parkway and remain on this road (with its various name changes) through to Tharwa. 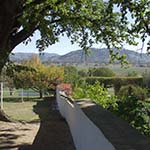 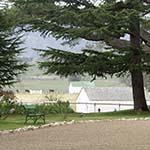 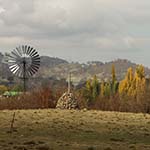 The drive to Lanyon through Tuggeranong offers a dramatic contrast between suburban and pastoral life. As your wheels rattle over the first cattle grid, the encroaching suburbs seem a world away. The entire ‘Lanyon Bowl’ opens before your eyes. This great sweep of hills, riverfront and grazing land has been heritage listed and preserved, both as a working property and as museum of station life. It is the ACT’s most outstanding intact pastoral property.

There is a rich cultural landscape to be explored, revealing evidence of Aboriginal and European relations with the land. There are Aboriginal scar trees, kangaroos, sheep and cattle, station structures dating from convict times, workers’ cottages and the homestead, flower gardens, and many other aspects of 19th and 20th century rural life.

Lanyon overlooks the Murrumbidgee River, once one of the ‘limits of location’ in NSW. The station is named after John Lanyon, who acquired the property in 1835. In partnership with brothers James and William Wright, he worked with their assigned convicts to establish the pastoral industry in the river valley. A complex of buildings and a courtyard arrangement formed by the original homestead and outbuildings, including an external kitchen, reflects that early industry and the self-sufficiency required of early settlers in this remote region. The complex includes gardens, a dairy, workers’ quarters, stables and storerooms, and a small gaol, as well as a bell hung in a turret and rung to call the shepherds and labourers to their work.

John Lanyon soon returned to England, leaving James Wright to manage the property, but natural hazards took their toll. By 1848 the family was badly in debt due to drought followed by floods, and they moved to Cuppacumbalong, across the river. Lanyon was purchased by Andrew and Jane Cunningham from Scotland, who built a successful pastoral holding; the Cunningham family lived and worked at Lanyon from 1849 until 1926.

The Cunninghams added Tuggeranong Homestead to their holdings in 1858 (the property is also open to visitors). In a further demonstration of their success, they built the present homestead at Lanyon in 1859, the first of many extensions. Jane raised eight children at Lanyon, and in 1905 the third son, AJ Cunningham, extended the house when he married.

Farming life continued at Lanyon well after other areas had been resumed to develop Canberra. The property was saved and restored from the 1960s, and a gallery was built nearby to display Sidney Nolan’s art. You can visit the gracious house whose rooms are decorated in the style of the era they were built. In the neat outbuildings displays explore the lives of Lanyon’s workers. Canberra’s people love to visit Lanyon. Join them in a walk around the fine gardens, enjoy the café or a picnic, and return for one of the many special events.

Open Hours:
Tues – Sun and most public holidays 10am to 4pm