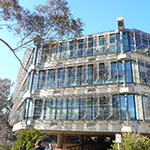 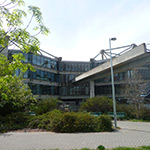 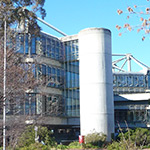 A walk around the perimeter of the Callam Office complex reveals its radical architecture.

From Yamba Sports Club drive back along Launceston Street. Turn left then right into Callam Street. Drive into the buildingís front drive to read the sign and view the building.

From the Visitors Centre continue south over Commonwealth Bridge. Take Capital Circle around Parliament House and stay on this road for 6 km, veering left onto Yamba Drive. Turn right into Launceston Street then left into Callam Street.

Although visitors Callam Street, Phillip cannot access the inside of the offices, there are several good views of the outside from many angles.

The Callam Offices were the first example in Australia of an office building where the complete perimeter structure is supported by suspension cables. It was designed for a flood plain in the wake of the 1971 Woden flood that killed seven people

It is one of two large scale office complexes designed by John Andrews International in Canberra, the other being the Cameron Offices at Belconnen. John Andrews said he considered the Callam Offices a significant work in his career.

The Callam and Cameron offices are two of five office complexes commissioned by the National Capital Development Commission in the 1960s and 1970s. The others are the Edmund Barton Offices by Harry Seidler and Associates, the McLachlan Offices by Darryl Jackson Evan Walker Architects, and the Benjamin Offices by McConnel Smith and Johnson.

Open Hours:
Although visitors cannot access the inside of the offices, there are several good views of the outside from many angles.