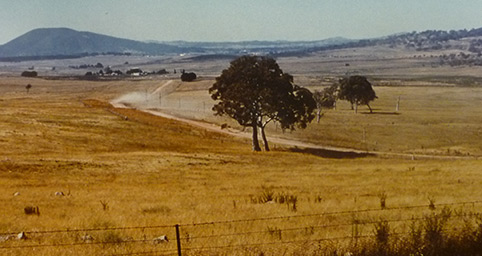 This view looks north from The Old Long Gully Road to the Yamba property where Woden now stands. The road is The Cemetery Road and was important for the Eddisons of Yamba, the Maguires of Melrose and the Campbells of Yarra Glen, all of whose properties were accessed via this road. Below, outside the yamba Sports Club, is close to where the house once stood. From Yarra Glen, drive south down Groom Street then right into Wisdom. At the end turn right then left into Launceston. Turn right into Irving Street. The sign is on your left.

From the Visitors Centre continue south over Commonwealth Bridge. Take Capital Circle around Parliament House and stay on this road turning right at the large roundabout onto Melrose Drive. Turn left into Launceston Street and left again into Irving Street.

The Eddison family won Yamba in the 1920 soldier settlement ballot and were farming the block while still living in Queanbeyan. They bought The Oaks at Oaks Estate and the family grew crops along the Queanbeyan River.

However, by 1926 the government determined that all soldier settlers must live on their allotments. Yamba homestead was built close to the property's border with Yarra Glen so the Eddisons could access town water.

By 1937 The Captain (as Walter Eddison was known) was sending his sons up to the Snowy mountains in search of summer grazing country for his sheep. The three daughters did much around the farm and this increased while their three brothers fought in World War II.

Marion (nee Eddison) describes how shedding, or getting the sheep into the shed, was made easier with Poddy lambs: We always had poddy lambs, orphan lambs, usually in our kitchen, but as they grew up and went back to the mob they were still very friendly. Shedding was always easier if you could go up into the shed first and then call a poddy to follow you. The poddy would come and the rest of the mob followed.