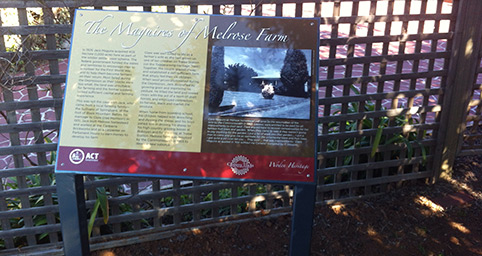 A few old trees are all that connect us with the Melrose property.

From the Tuggeranong Parkway road cutting drive east along Heysen Street to its end at Launceston Street. Turn left at the lights into Melrose Drive then first left into Theodore Street. The sign is about 500 m along on the left into the footpath through to James Place.

From the Visitors Centre continue south over Commonwealth Bridge. Take Capital Circle around Parliament House and stay on this road then take the Carruthers Street exit. Turn right into Curtin and first left into Theodore Street. The sign is about 500 m along on the right into the footpath through to James Place.

In 1916 Jack Maguire went off to World War 1. His wife Claire describes this time: 'He was only a boy when he went to the bloomin war, he has only 17. He said, ìI no sooner got there and I wish I'd stayed home.î He was in the light horse. He'd never talk about the war days, I think they were a bit of a nightmare to him.í (Claire Maguire as quoted in 'Not without my Corset!' compiled by F. Douglas.)

The Maguires farmed Melrose, a soldier settlement block, from 1926 until 1963. However hard soldier settler families worked, their blocks were usually too small to sustain them and they sought other income. Jack went droving to find extra money. As soon as his sons were old enough they pack saddled their horses and took the sheep up to extra land at Boboyan and Mt Clear (now Namadgi National Park). The sheep came back in good condition ready to be shorn at Tralee (on Track 8), where Claire grew up.

The Maguires, who loved the land, were devastated when Melrose was resumed by the government in 1963. Melrose Drive was gazetted in 1966 when Woden was being built. Like the major roads of Yamba, Yarra Glen and Athllon, Melrose Drive links us to an earlier time and reminds us of farming properties in the district.