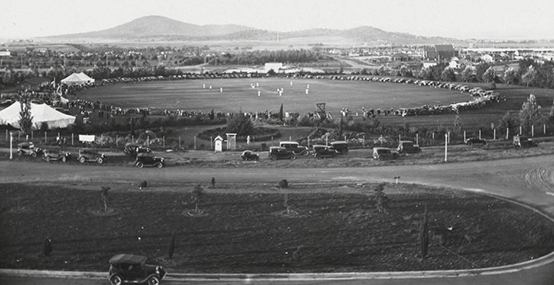 Originally called Blandfordia Recreation Reserve, Manuka Oval was developed in the 1920s and was the site of many sporting events including cricket as seen in this 1930s image above. At each end of the shopping strip on Franklin Street is a sign exploring the many stories relating to Manuka shops (below left). The well-loved Manuka Pool (below centre) enters its 90th year with its beautiful building design continuing to retain its integrity. The Canberra Services Club succumbed to fire in April 2011 and was removed from the ACT Heritage Register. 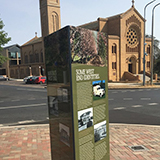 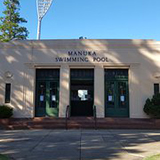 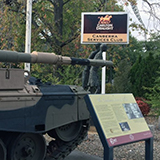 Manuka Oval is significant for its continual use as a Canberra sporting facility. The oval retains an array of features including the historic tree plantings, the Caretaker's Cottage and the later scoreboard which tell the story of its development as a popular sporting venue. The Prime Minister’s XI cricket match was first played here in 1952 under Prime Minister Robert Menzies. They were revived in the 1980s by Prime Minister Bob Hawke.

The building of Manuka Pool provided work during the Depression and was the only public building in the city to be opened in 1931. It was a welcome oasis for locals who previously swam in the Molonglo and Cotter rivers.

The Canberra Services Club was a fine example of Inter-war Georgian Revival architecture. A memorial dedicated to the Kokoda campaign and Papua New Guineans who helped Australian servicemen, sculpted by Helena Anderson, can still be seen on site, having survived the 2011 fire.