Here is a chance to ride your bike on the Centenary Trail. There are several entries from different parts of the suburb of Bruce. You will have views of Belconnen Town Centre and Lake Ginninderra from the top and kangaroos will probably be basking in the sunshine. You may see students from the school below using the hill as a cross-country course. 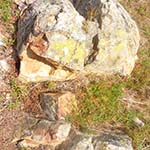 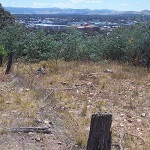 From the student residences, return south down Aikman Drive left onto Eastern Valley Way then second left into Whelan Street. Turn left into Crisp Circuit and park near street number 92 and ascend the path to Gossan Hill. From the summit veer to the north to see the sign.

Gossan is a Cornish word used to describe the red iron-bearing outcrops of reddish soils and rocks. These coloured soils, or ochres, were used by Aboriginal people as a ceremonial pigment. The open red stringybark forest provides some great wildflower displays in spring, including spectacular orchids.

This site is on the Canberra Centenary Trail.

The name for this district, Belconnen, was taken from a land grant in the area made in 1837 to the explorer Charles Sturt. The first residential leases in the nearby suburb of Aranda were offered at auction in 1967. The last two suburbs for Belconnen are Dunlop and this suburb of Bruce.

Location:
College Street, Bruce, although there are several entry points