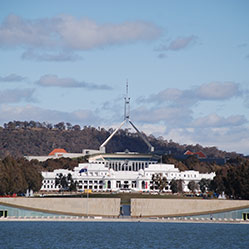 You’re looking at Canberra in the Australian Capital Territory. Why Canberra? Lying before you is a scene dramatically different to the rural landscape of the Limestone Plains. Track 3 reveals the ambitions and frustrations of creating a national capital far from Australia’s established cities, as well as a vast ongoing project of planning, landscape design and planting, construction and community building. From a government town planned for 75,000 people, Commonwealth and private builders and waves of new residents have created a city of more than 300,000, and a place of national and international significance. Canberra is an open-air planning museum, displaying an evolution from ‘City Beautiful’ and ‘Garden City’ ideas to ‘sustainable environment development’ thinking. Looking from the hilltops reveals how planning has been carried out on a large scale, with the city, suburbs and towns carefully fitted into the beautiful landscape. 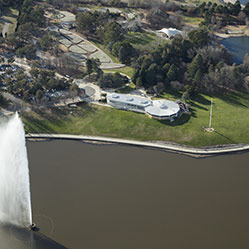 The colonies of NSW, Queensland, South Australia, Tasmania, Victoria and Western Australia federated to form the Commonwealth of Australia on 1 January 1901. Politicians argued over where to place the nation’s capital, and their compromise was enshrined in the Australian Constitution, where it can still be read today. The capital would be in NSW, but at least 100 miles (160 km) from Sydney, and Parliament would sit in Melbourne until a parliament house was built in the new city.

Sites in south-east NSW (towards Victoria) were preferred. The Yass-Canberra district was sufficient distance from Sydney with good water and an ‘invigorating’ climate. The Federal Capital Territory (Australian Capital Territory) came into being on 1 January 1911. The territory was 2,356 square kilometres with a population of 1,714 plus 22,000 sheep. All private property became 99 year leasehold land held by the Commonwealth.

The Minister for Home Affairs, King O’Malley, led an inauguration ceremony on Capital Hill in 1913 to mark the start of construction. Lady Denman, the Governor-General’s wife, named the city ‘Canberra’. The ACT celebrates Canberra Day in March.

Unlike Australia’s state capitals, beauty was an important factor in selecting the site of the federal capital. Surveyor Charles Scrivener chose a setting for ‘a beautiful city … worthy of the object, not only for the present but for all time’.

Canberra was planned as a city in the landscape. The vision reflected nationalistic ideals of the young Commonwealth and early twentieth century enthusiasm for town planning. In 1912, an international design competition for the capital was won by Walter Burley Griffin. His plan was extraordinarily illustrated by his architect wife and professional collaborator, Marion Mahony Griffin. The plan drew on both ‘City Beautiful’ and Garden City ideas. It fitted the geometry of the city’s plan to the landscape features of the Limestone Plains and surrounding locality.

Scivener's idea that the Molonglo River could be transformed into an ornamental lake was expressed in the Griffin Plan, and was ultimately realised with construction of the dam that bears his name.

Griffin’s plan was magnificent but progress was painfully stop-start, and what you see laid out before you has been a long time in the making. Responsibility for design and building was divided between different departments, and work was also hindered by lack of funds. Griffin became Federal Capital Director of Design and Construction, but struggled to implement his plan. Construction of the capital had scarcely begun by 1920 when Griffin’s appointment was ended.

The outbreak of World War One in 1914 also halted plans to erect a grand parliament house for the new government. A temporary (‘provisional’) parliament house was built instead, and opened in 1927. A permanent parliament house, the present building, was not opened on Capital Hill until 1988.

An ‘initial city’ at Acton was administered from ‘The Residency’ (Old Canberra House), surrounded by temporary buildings and tents. A Federal Capital Advisory Committee succeeded Griffin in 1921. Construction began on the provisional Parliament House and the suburbs of Acton, Ainslie, Braddon and Kingston, but most of Canberra’s 3,000 residents of construction workmen and their families lived in camps.

The Federal Capital Advisory Committee was abolished and development accelerated when the Federal Capital Commission (FCC) took over in 1925 with the aim of transferring parliament from Melbourne. The first public servants were transferred from Victoria’s capital in 1926, just before Canberra’s provisional Parliament House opened in 1927.

A hierarchy of housing spanned the Prime Minister’s Lodge, cottages, and hostels for single public servants. Many of these government cottages and former hostels (such as Gorman House and Hotel Canberra) can be seen today. The FCC also completed secretariat blocks near Parliament House, called East Block (now the National Archives of Australia) and West Block, as well as the Mediterranean-style Sydney and Melbourne buildings as shopping centres in Civic. Canberra overtook Queanbeyan as the region’s largest town, but with prohibition in force in the territory, many people did their drinking in the NSW town.

With the onset of the Depression in 1929 the FCC was disbanded, once again stalling development. This pause was extended by World War Two. By 1945 a population of just 13,000 occupied six suburbs scattered north and south of the Molonglo, and with only a handful of buildings in the parliamentary triangle.

A Senate Committee criticised Canberra’s slow progress. William Holford, an eminent British planner, was invited to review the planning future. Holford recommended keeping Canberra a garden city, making Griffin’s land axis more visually effective, and constructing more monumental buildings. He posed a choice: Canberra could remain a divided city, with the Molonglo floodplain forming a wedge between north and south, or it could become a unified and modern city, a cultural and administrative centre and a national capital. This would require an all out operation to build on a scale to stir people’s imaginations.

Prime Minister Sir Robert Menzies threw his support behind this grand project. The National Capital Development Commission (NCDC) was established in 1957 with four main tasks: complete the establishment of Canberra as the seat of government; house transferred public servants; make Canberra a worthy national capital; and create ‘a place in which to live in comfort and dignity’.

The NCDC era was Canberra’s major phase of growth in an internationally-recognised planning program. The view from the hills reveals this achievement. The spirit of Griffin in central Canberra was resuscitated. His lake scheme was finally implemented, overlooked by newly-built institutions such as the National Gallery within a central national area. The Russell Hill Defence Offices, Anzac Parade and other national projects and institutions were also constructed, combined with city, town and suburban regions, open spaces and planting, roads and cycleways.

The whole city was treated as a landscape work, Australia’s largest single landscape project. Landscaping was included as part of the cost of each development. Roads, schools, reservoirs – all were brought together into a single approach. A hierarchical urban structure was established with a descending order of towns, town centres, and suburban neighbourhoods as well as facilities such as schools, reservoirs and reserves. The NCDC adopted a decentralised development model, building four new towns: Woden-Weston Creek, Belconnen, Tuggeranong and Gungahlin. The layout of new towns, linked by arterial roads and open spaces, contrasted with the sprawling concentric pattern of most Australian cities. The design, later called the Y-Plan because the metropolitan layout was in the form of a ‘Y’, has shaped all subsequent urban growth in Canberra.

The territory’s population passed 8,000 in 1930 with 1,100 public servants. Building workers had constructed a dam, a power house and a railway, as well as housing, playgrounds and churches, shopping centres at Civic, Manuka and Kingston, Parliament House and public offices. In a short space of time, they had created a brand new country town with aspirations to greatness.

The Depression, World War Two and post-war shortages kept these aspirations in check, although some national institutions were built – notably, the Australian War Memorial (1941). Canberra remained small until 1958 when the major build-up of the public service began. Thousands of families transferred into new houses. Many of the building workers themselves, including Italians and other European immigrants who moved from the nearby Snowy Mountains Scheme, lived for years in camps, just like their predecessors in the founding years.

Canberra changed dramatically between 1945 and 1970 as the population grew tenfold to 130,000. In the 1960s the growth rate was above 10% per annum, making Canberra the nation’s fastest growing city. To foster suburban communities and support decentralisation, government offices were opened in the new town centres of Belconnen, Woden and Tuggeranong.

Administration of the ACT remained with the federal Department of the Interior (later, Capital Territory) but the Commonwealth was determined to shift responsibility for Canberra to the residents (who opposed self-government for the same financial reasons). The ACT became self-governing in 1989. Office blocks flanking Civic Square, which housed the Department of the Capital Territory, became the focus of a self-governing community. They are now occupied by the ACT Legislative Assembly and Canberra Museum and Art Gallery.

The National Capital Development Commission was abolished in 1989. Municipal functions were transferred to the new ACT Government, with national design responsibilities taken over by the National Capital Authority. The NCA manages the Commonwealth’s continuing interest in the capital’s development, and designs national areas and memorials such as Lake Burley Griffin and Commonwealth Place.

View the map at ACTmapi and click on the letters marking a site to find a pop up box with some tantalising teasers.