You can enter the churchyard either from the west or east through two lych gates (below centre). These covered entries are rare in Australia and were used to provide a resting place for a coffin and shelter for mourners before entering the church. The church office has a full list of those buried here. 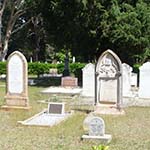 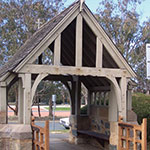 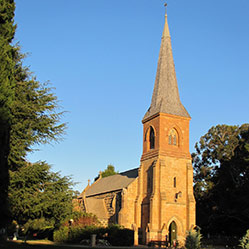 From All Saints Church in Ainslie, turn left onto Limestone Avenue. Turn right into Coranderrk Street just before the War Memorial turn-off. Coranderrk becomes a main road. Turn left at the lights into Constitution Avenue. After the Canberra Institute of Technology, turn left into the church.

From the Canberra and Region Visitors Centre return north continue around Vernon Circle, almost a u-turn, then turn left onto Constitution Avenue. Turn left into the church after the Canberra Institute of Technology.

St John's is the oldest single denomination graveyard still in use in the ACT. The first burial was in 1844, a year before the church and graveyard were consecrated. With the growth of Canberra and the lack of another nearby public cemetery, burials by clergy of other denominations were permitted until the opening of a public cemetery in Woden in 1936.

Look at the different styles of tombstones over the many decades of use. Many names are recognisable to locals as they are now street or suburb names.

The church and adjacent schoolhouse played an important role in the region’s development. It features on Track 2—The Limestone Plains.