The entry to Hall Cemetery. Below left is the tiny endangered Tarengo Leek Orchid found at the cemetery. 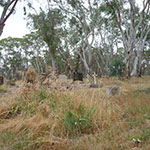 From Evatt continue north on Copland Drive. Turn left at Owen Dixon Drive, right on Kuringa Drive then left at the Barton Highway. Turn left into Wallaroo Road. The cemetery is on your right about half a kilometre down the road.

From the Canberra and Region Visitors Centre drive under Commonwealth Bridge and turn right into Albert Street and return north on Northbourne Avenue. Ater 5.5km turn left at the Barton Highway and continue for 10 km to Wallaroo Road. Turn left, the cemetery is on your right about half a kilometre down the road.

This is the oldest public general cemetery still in use in the ACT. Although dedicated in 1883, the first recorded burial was not until 1907.

An important reason for its inclusion on Track 4 is to highlight cemeteries as a very useful reserve for plant species. Most of the good quality woodland remnants are found in little used country cemeteries. This is because they are the only pieces of land that were fenced from livestock more than 100 years ago, when the country was being settled.

Hall and Captains Flat cemeteries  contain the endangered Tarengo Leek Orchid (Prasphyllum petilum) and both Hall Cemetery and Murrumbateman Cemetery are thought to contain populations of the rare grasshopper, Keyacris scurra. The regulating of the mowing of Hall Cemetery was adopted in 1994 to help the survival of the orchid.