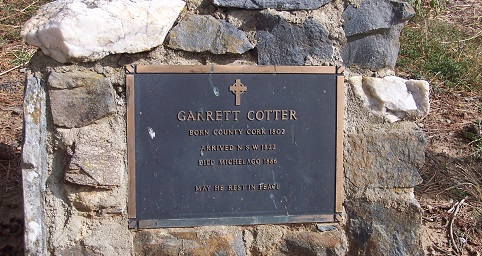 Water overflowing from the Cotter Dam was a spectacular sight in the 'bush capital' and the Cotter Reserve has long been popular for picnics, swimming and frequenting the Cotter Pub (a casualty of the 2003 bushfires). The area changed dramatically after the 2003 bushfires, but is still popular. Garrett Cotter's descendents still live in the region and he is buried at the Michelago Cemetery. 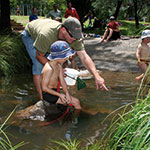 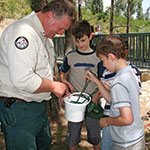 From the Cultural Centre continue along Lady Denman Drive, over Scrivener Dam, then right onto Cotter Road.

From the Visitors Centre return to Commonwealth Avenue, cross over Commonwealth Bridge, around Parliament House then take the left turn after the Royal Australian Mint exit onto the Cotter Road overpass.

After passing Casuarina Sands and crossing the single lane bridge, the campground is before the Cotter Avenue recreation area.

For tens of thousands of years the Ngunnawal people have welcomed travellers to this site. The Cotter nurtured the Ngunnawal and surrounding tribes as traditional owners and their ancestors cared for the land, rivers, animals and plant life.

The Cotter is named after Garrett Cotter, a convict assigned to a settler at Lake George. While there, Cotter was found guilty of stealing a mare and was exiled to care for stock on the outer reaches of settlement in the country west of the Murrumbidgee River. Cotter family tradition holds that Garrett owed his survival to the knowledge of his friend Onyong, a renowned local warrior.

Uriarra Crossing, about five kilometres upstream from the Cotter Reserve, was the site of the annual feast of the Bogong moth. Hundreds of Aboriginal people would gather to eat the moths, a rich source of protein and fat. The moth feast was an important occasion; it provided an opportunity for Aboriginal groups from the region to meet and establish important cultural links and trade with one another.

The Cotter Dam was built from 1912 until 1916. Steady population growth in the Canberra region meant new water sources were needed to supplement the original Cotter Dam. The height of the dam was raised in 1951 to increase capacity. Additional dams were constructed: Bendora Dam in 1961, Corin Dam in1968 and Googong Dam in 1979.

In 2007, faced with record low rainfall and inflows to the ACTs water supply catchments, the ACT Government announced a range of measures including the Cotter Dam enlargement.The main wall of the dam is 80 metres high, almost 20 times larger than the former dam.This work was completed in 2013.