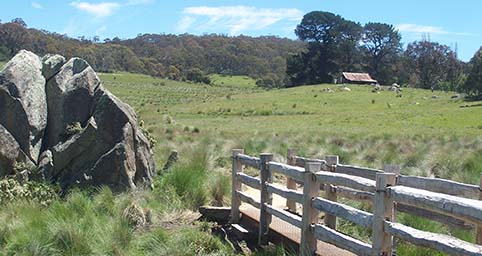 This wooden footbridge and Westerman's Homestead are part of the Settlers Track in southern Namadgi National Park. The visitors centre, below left, can advise on road and snow conditions. At Honeysuckle Creek Campground there are interesting panels about the ACT's role in the moon landing of 1969.

From Tharwa, continue south and turn left to the Namadgi National Park Visitors Centre. It is 2.5km south of Tharwa Bridge.

From the Canberra and Region Visitors Centre return to Commonwealth Avenue, continue south crossing over Commonwealth Bridge, around Parliament House then take the left turn after the Royal Australian Mint exit onto the Cotter Road overpass. Turn left onto Tuggeranong Parkway and remain on this road (with its various name changes) through to Tharwa. 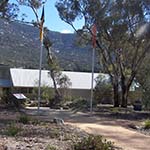 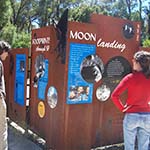 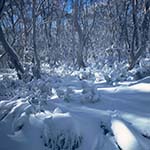 Namadgi is an Aboriginal name and refers to the mountains south-west of Canberra. Namadgi was declared a National Park in 1984 and covers a 106,095 hectare area. In April 2001, the Ngunnawal Aboriginal people were given official recognition of their association with the land and cooperatively manage the park with the ACT Government. This agreement recognises the obligation of the traditional custodians to their ancestors and their descendents to maintain an active cultural life in the management of the park.

Archaeological evidence suggests that the area now known as Namadgi was sufficiently rich in food and shelter to provide year round rather than seasonal habitation. In addition, the annual harvesting of the Bogong moths brought groups from as far away as the Shoalhaven River. These seasonal gatherings provided an opportunity for trade, intermarriage and ceremony.

Namadgi is rich in archaeological evidence with over 200 Aboriginal sites recorded within the park. The increased ground visibility as a result of the 2003 fires resulted in the location of around 150 sites consisting primarily of stone artefacts arising from tool manufacture.

'An important job Ngunnawal descendants have today, is the recording and management of our heritage sites and places. The various clan groups work together with archaeologists and the ACT Government to record and manage our sites.'

It is important to remember that all Aboriginal sites and artefacts are protected by law in the ACT to ensure their long-term survival. In particular, please do not touch the rock art at Yankee Hat as it is extremely vulnerable.

Namadgi forms part of the Australian Alps National Park, and covers 106,095 hectares, more than half the area of the ACT. Namadgi connects with Kosciuszko National Park in the south and with Brindabella National Park in the north-east. The Cotter River, a major part of Canberra’s water supply, has its source in the south and flows north through Namadgi to its confluence with the Murrumbidgee. Namadgi contains the highest mountain in the ACT; Mt Bimberi at 1911 metres is snow-covered in winter and trees find survival difficult. There are herbfields covered with flowers such as silver snow daises and billy buttons. Fire trails provide access to remote parts of the park.

The vegetation is diverse, a consequence of the wide elevation range, from about 900 metres to the heights of the Bimberi Range. Even a short walk will take you from low eucalypt woodland up to snow gums. In wet, sheltered locations you can find other eucalypts, including Brown Barrell, Ribbon gum, and Alpine Ash. The wide variety of ecosystems provide habitat for many species of bird, reptile, mammal and insect. Some of the animal and plant species and ecosystems are rare, threatened or endangered. Namadgi provides for their protection as well as the preservation of cultural heritage.

After decades in a container, an 1845 slab hut has been rebuilt within a new interpretive shelter that celebrates the skills and tenacity of early European settlers in this region next to the Namadgi Visitors Centre. The salvaged materials of the early hut have not only have been reconstructed, but made into a learning experience through interpretive panels and oral histories that evoke the lives and stories of early settlers.

Embedded into the rammed-earth walls, echoing a popular construction method used by local settlers, are QR codes that pinpoint locations of other pre-1913 buildings on Google maps. The new technology contrasts with the skills used by pioneering families before electricity, to overcome challenges such as managing stock, extreme weather, isolation, transport, schooling and medical help.

The Gudgenby in a Box interpretive shelter encourages visitors to connect with heritage through a mix of old and new technologies and is a short walk from the Namadgi Visitors Centre.

The Mouat Tree Shelter marks the centenary of the completion of the border survey for the Federal Capital Territory (as it was then known) and to commemorate the achievements of the pioneering surveyors. The Mouat Tree is named after surveyor Harry Mouat. With Percy Sheaffe and Freddie Johnston it took five years to complete the border survey.

The tree has a carved survey mark, one of over 1,500 'blazed' trees on the border. After 100 years there are only 4% border reference trees remaining due to decay, wind and fire. From deep in the southern ranges of Namadgi National Park, this tree was removed and received conservation treatment to remove white ants. To tell the story of the ACT-NSW border the tree is erected under a shade-cloth structure, which harkens back to the tents the surveying teams used.

In addition to the interpretive panels you can download the Canberra Tracks Augmented Reality App and listen to a ballad written by Surveyor Mike Lavis (9.4 MB) or view a short video about Robert Scrivener, the first Director of Commonwealth Lands and Surveys. Open the app on your device and hold it over the designated images on the panels to trigger the download.