Built and furnished in 1927, Calthorpes' House remains unchanged to this day. Another property overseen by the Cultural Facilities Corporation is Mugga Mugga in nearby Symonston. This worker's cottage (below left and centre) of 1839 contrasts well with Calthorpes' House.

From Lanyon return north along Tharwa Drive, turning right at the roundabout following the sign to the Monaro Highway. Turn left onto Hindmarsh Drive then right into Mugga Way.

From the Canberra and Region Visitors Centre continue down Commonwealth Avenue and cross the bridge. Take the outer State Circle around Parliament House and take the fifth lights left onto Melbourne Avenue. At the roundabout turn left onto Mugga Way. 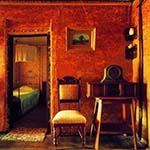 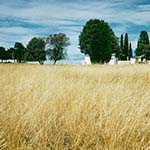 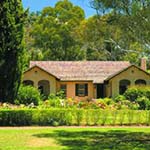 At first glance this comfortable suburban home seems far removed from the stone homesteads and bark huts of the early settlers, but Calthorpes’ House links the story of the Limestone Plains to the early years of Canberra. Harry Calthorpe applied for a soldier settlement block after World War One but turned it in, declaring it insufficient to feed a crow, let alone a family. He bought a stock and station firm at Queanbeyan and conducted much of the business in the Canberra region. His firm was Canberra’s real estate agent for the city’s first land sale held in 1924.

Calthorpe’s wife, Dell, was excited by the chance to build a home in a modern city with up-to-date amenities. She persuaded Harry to buy one of the blocks on Mugga Way and built a rendered brick home on the slopes of Red Hill with a good view of Duntroon. The blocks in the suburb of Red Hill were planned to be larger than those in any other Canberra suburb, and were reserved for private sale rather than for development as government housing. The large sites allowed households to be self-sufficient, and a semi-rural landscape was created with orchards and family cows.  Large gardens and orchards can still be seen in Red Hill, including at Calthorpes’ House.

Harry Calthorpe maintained the stock and station office in Queanbeyan and formed close friendships with pastoralists and farmers, including Patrick Curley who lived nearby at Mugga Mugga. Calthorpe was highly regarded in his career and became President of the NSW Stock Station Agents. Meanwhile, Dell Calthorpe revelled in her new suburban home with running water and other ‘mod cons’, which had been unavailable in their old country home.

Built and furnished in 1927, their house remains unchanged to this day. Calthorpes’ House, in its gracious garden, is run as a rare and fascinating 20th century house museum with all of the family’s original possessions, such as Harry’s war memorabilia, a pianola, Dell’s dresses, household appliances, their daughters’ toys, as well as an air raid shelter dug during World War Two. You’re always welcome at Calthorpes’ House, but be prepared to put on bootees to help preserve the floors.

Four historical properties are maintained by the ACT Government to display life on the Limestone Plains and during the early years of Canberra. They are Mugga Mugga, Lanyon, Tuggeranong Homestead and Calthorpes’ House. All four properties are located in southern Canberra, and may be included in the Limestone Plains tour, or visited on open days and during special events.

Mugga Mugga (8 Narrabundah Lane, Symonston) is open on certain days, and offers a glimpse of the lives of the families who worked on the Limestone Plain’s pastoral estates, with homes very different to the elaborate homesteads of the station owners. Standing on 17 hectares of grazing land this simple stone cottage was built in about 1839 for the McPhersons, a free immigrant family whose father was employed by the Campbells as head shepherd of Duntroon. The cottage was modestly extended in later years, and has been conserved and furnished with items belonging to the Curley family who moved there from Duntroon as tenant farmers in 1913. Curley family members were still living there when Mugga Mugga was included in the Canberra city area in 1954. An environmental education centre nearby explores issues relating to energy, water and endangered grasslands.

Tuggeranong Homestead (Johnson Drive, Richardson) is surrounded by suburbia, and is open to visitors. The property dates from an 1824 land grant, named Wanniassa by a later purchaser (both names are still used for Canberra districts). A fine 1840s convict-built stone barn stands close to the later homestead. The Cunningham family of Lanyon bought the property in 1858, and built one of the largest houses in the region. The main part of the present homestead was built for James Cunningham in 1908, incorporating an 1830s fireplace from the original cottage.

The property gained fame of a different kind when CEW Bean and his history team wrote the first volumes of the official World War 1 history at the homestead from 1919 to 1925. The homestead displays include Bean’s work. Bean also urged the government to establish a war museum, and collected material even before the war ended, now on display in the Australian War Memorial at the foot of Mt Ainslie.