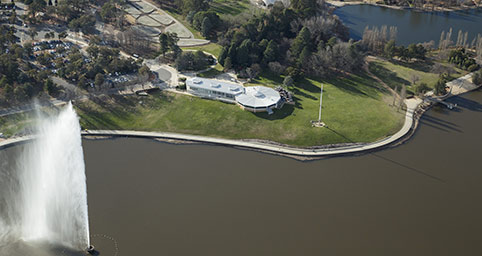 The National Exhibition Centre at Regatta Point is a great first stop for visitors to the national capital. Chinese visitors (below centre) take advantage of the Mandarin commentary on Canberra's plan. This display can be heard in seven languages. The exhibition explains the choice of Canberra as the national capital over 100 years ago. 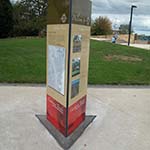 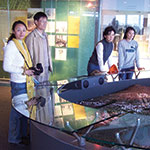 From Mt Pleasant, return down General Bridges Drive and turn left onto Robert Campbell Road and exit the ‘gun gates’ left onto Fairbairn Avenue. Turn left onto Anzac Parade and right at the roundabout onto Parkes Way. Take the first exit left onto Commonwealth Avenue then the next left onto Albert Street before crossing the bridge.

It is next door to the Canberra and Region Visitors Centre.

The National Capital Exhibition Centre tells the story of the planning and development of Canberra with interactive displays. Canberra’s vital role as a symbol of Australia’s unity is revealed. It features the people, events, history and design which have contributed to the development of our unique, modern, fully planned city. Discover why Canberra was chosen as the site of our national capital and explore alternative plans for the city.

The centre was built by the National Capital Development Commission as an observation point to allow people to watch the construction of Lake Burley Griffin and Commonwealth Bridge.  Richard Clough, the NCDC landscape architect, designed the octagonal pavilion, which was opened in 1963. The exhibition in the pavilion proved so popular it became permanent, and has been greatly extended by the National Capital Authority.

Open Hours:
Mon – Fri: 9am to 5pm, Weekends 10am to 4pm. Closed public holidays except Australia Day and Canberra Day

Time to get there:
10 minutes from Mt Pleasant
Next door to the Visitors Centre