During the first half of the 20th century, advances in wireless radio communications resulted in its increased importance for military use between shore bases and ships on active service. The Belconnen site (off limits to the public) was selected and built in 1938 to play an integral role in naval communications. The aerial view below (courtesy of National Archives of Australia A1500:K14331) was taken in 1966 and shows a 'Garden City' style village of 26 weatherboard cottages for station staff and their families. Part of the now demolished transmitter station is below right (photo courtesy National Trust ACT). 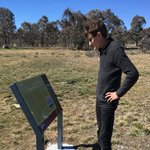 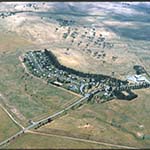 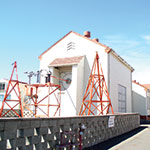 From Palmerville, turn left back onto Owen Dixon Drive then right onto William Slim Drive. At the next roundabout turn left onto Baldwin Drive. Turn right at the next lights onto Stockman Avenue then first right onto Jumbuck Crescent and right again onto Dawn Crescent.

Once referred to as HMAS Belconnen, this site was the most powerful short wave naval wireless station in the Commonwealth and the largest naval or commercial station in the southern hemisphere during World War II.

After 66 years of service that included the Korean War and Vietnam War naval communications and relaying the 1956 Melbourne Olympic results to the world, the site was decommissioned. The last message was sent from Belconnen on 17 June 2005.

To read more about the end of 'Bels', as the site was affectionately referred to, read military historian Rohan Goyne's article.

Open Hours:
Not open to the public