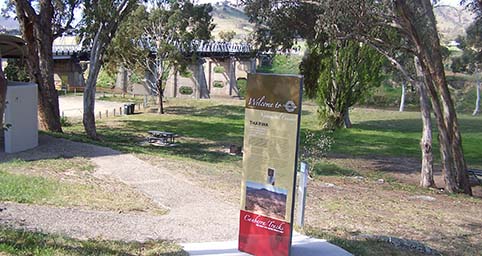 This is the recreation area at Tharwa Bridge. The photo of local Aboriginal people below, was taken in the Tharwa area. The historic Tharwa Bridge is a rare remaining Alan Truss construction. It has been completely restored and officially reopened in March 2012. The aerial photo (courtesy Geoff Comfort) shows Mt Tennent, the Murrumbidgee River and the village of Tharwa.

From the Canberra and Region Visitors Centre return to Commonwealth Avenue, continue south over Commonwealth Bridge, around Parliament House then take the left turn after the Royal Australian Mint exit onto the Cotter Road overpass. Turn left onto Tuggeranong Parkway and remain on this road (with its various name changes) through to Tharwa. 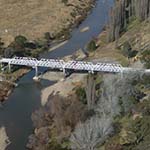 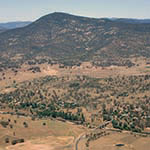 Tharwa is part of an ancient Dreaming Track telling the story of ancestors travelling the land. In more recent times, Tharwa was the home of several Aboriginal families who worked for the early white families such as the De Salis’ of Cuppacumbalong. Black Harry Williams spent 30 years working for the De Salis family as a farmer and stockman. George De Salis recorded in his diaries the quality of Black Harry’s athleticism.

‘26th December 1882: Black Harry rode. Ran in first heat but being put on scratch he did not take a place, the reason being he got a bad start and got battered among so many runners. He ran in the 200 yards race and having a good handicap doubled his lead before reaching the rope. Everyone was delighted to see him win.’