Duntroon Dairy is believed to be the oldest standing building in the ACT. It is often open during the Heritage Festival in April (below left). Informative signage still makes a visit to this site worthwhile at other times of the year.

From Mt Ainslie return down Mt Ainslie Drive and turn left onto Fairbairn Avenue.  At the roundabout turn right onto Northcott Drive. Turn left into Sellheim Avenue then left again into Kelliher Drive.  Drive to the furthest car park. Although the dairy is closed to vehicles except for special open days, you are encouraged to walk through to explore the dairy.

From the Canberra and Region Visitors Centre return northward along Commonwealth Avenuw and in 500m take the second exit onto Parkes Way east. After the underpass turn left at the next roundabout, following the signs to the dairy. 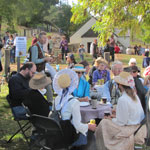 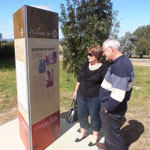 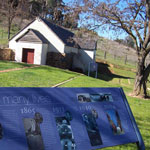 Duntroon Dairy is a remarkable survivor of farming days. Many families lived and worked in simple stone or timber buildings near the Molonglo River, but Canberra’s construction destroyed most of them. The dairy is the oldest building on Duntroon Estate and Canberra’s oldest European building. Around 1832, soon after Robert Campbell settled Duntroon, the dairy was built above the fertile floodplain to provide milk and butter for the many people living on his estate.

The property became home to several generations of many families who worked for Campbell. For example, Ambrose Austen, who became dairyman in 1865, extended the stone dairy in brick and built a family cottage. His daughters, Alice Warwick and Elizabeth Mayo, continued living at Duntroon Dairy. Even after Duntroon was resumed in 1911, Elizabeth’s daughter Jennet and son-in-law Charles Edlington leased back the land and continued dairying into the 1960s.

Most buildings were then demolished. Their ruins form a well-marked archaeological site. The shingle-roofed dairy has been carefully restored, and you can walk around the cool interior or read fascinating signboards outside telling this story of farm life on the Limestone Plains.

Want to see inside?

A 360 degree internal panorama will give you a look inside when you download the Canberra Tracks Augmented Reality App. Hold your device over the designated photo on the sign and it will trigger the panoramic view.

Open Hours:
Daily, however the dairy building itself is only open on special days. Phone for further information.