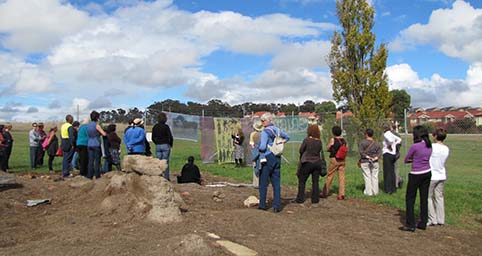 The Valley Ruin was the site chosen by artist Annie Trevellian for her ephemeral installation during the 2012 Canberra and Region Heritage Festival. Annie's thorough research provided plentiful material to then source appropriate images for her textile printing. Her guided tour of the site showcased new interpretations to an audience made up of locals, artists and those connected to the former property. One of those was Lionel Moore, posing at the homestead in the 1970s and again in 2012. 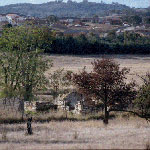 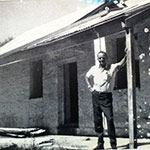 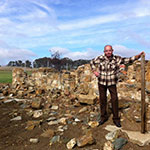 ‘The Valley’ represents the common evolution of the dwellings of small landholders in the late 1800s in the region that was to become the ACT. Thomas and Catherine Gribble settled here in the 1860s and built a slab hut. Their family increased, so a pisé section was built between 1874 and 1878. Finally, a stone house was built in 1887. All three stages were used concurrently and are still visible.
The builder, Thomas Gribble, was a successful small landholder who embraced new technology in agricultural practice. The Gribbles were contributors to the economic, social and sporting life of the Ginninderra region and are still represented in the ACT and remembered by early residents of Canberra.