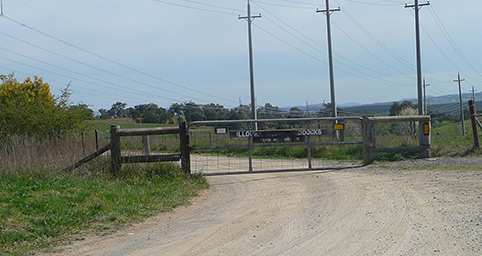 The Tuggeranong Parkway runs through the earlier Illoura property. The community horse paddock in Curtin is named after this property. 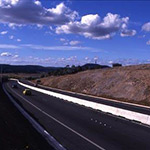 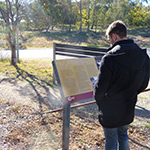 From Stromlo Forestry Settlement return east along Cotter Road, turn right into Streeton Drive and 2nd left into Heysen Street. The sign is just past the Tuggeranong Parkway overpass on the right.

From the Visitors Centre continue south over Commonwealth Bridge, around Parliament House then take the left turn after the Royal Australian Mint exit onto the Cotter Road overpass. Turn left into Streeton Drive and 2nd left into Heysen Street. The sign is just past the Tuggeranong Parkway overpass on the right.

Over 400 million years of history are shown in this road cutting. The geology, revealed through the construction of the Tuggeranong Parkway, provides a view far back into the early geological history of the Canberra region, when it had a very different appearance to today - and was on the coast.

The cutting stands on the former soldier settlement farm of Illoura, leased by Guy Tanner. His wife, known as Brownie, was a crack shot famous for shooting and skinning enough rabbits as a young girl to raise money for a harness for her motherís sulky. Like other families in the valley they killed their own sheep, reared chooks, had an orchard and made lots and lots of jam.

Open Hours:
Open daily. The road up Oakey Hill is only accessible to rangers.