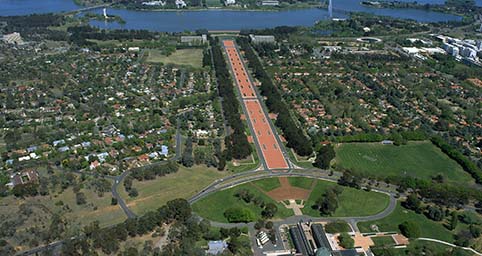 From the Canberra and Region Visitors Centre return northwards on Commonwealth Avenue. Take the second exit onto Parkes Way east and after 1.5 km turn left onto Anzac Parade. At the end is the Australian War Memorial. Turn right at the end then left onto Mt Ainslie Drive. 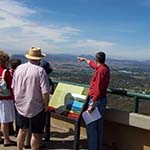 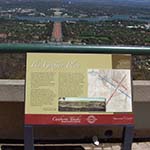 Looking from Mt Ainslie is the best way to take in Canberra's magnificent setting and design features. Walter Burley Griffin, who won the international design competition for the capital in 1912, described the site as 'an irregular amphitheatre' with Mount Ainslie, Black Mountain and Mount Pleasant 'forming the top galleries'. The slopes to the water formed the auditorium, and the Molonglo and floodbasin formed the arena. The southern slopes were ‘reflected in the basin, the terraced stage and setting of monumental Government structures sharply defined rising tier on tier to the culminating highest internal hill, Capital Hill; and with Mugga Mugga, Red Hill and the blue distant mountain ranges forming the back scene of the theatrical whole…’.

The main view takes in Griffin's plan and its modifications. Lake Burley Griffin forms a unifying design element. Looking across the lake to Parliament House, you are sighting along Griffin's land axis, aligned with four hill summits from Mt Ainslie through Camp Hill, and Capital Hill to distant Mt Bimberi, admittedly less conspicuous than Griffin imagined in Chicago. Crossing this at right angles is the water axis along the lake formed from the Molonglo River and named for the architect himself. His wife was also instrumental in the winning of the design competition is commemorated at this viewing platform which was changed to the Marion Mahony Griffin View in 2013.

You can readily grasp Griffin's geometric plan from this high viewpoint. Within the cordon of hills is the triangle formed by the capital's three functional points: Parliament House (Capital Hill), Civic (the commercial city) and the military (at Russell, marked by the tall Australian–American Memorial). Canberra's main ceremonial area forms a 'National Triangle', bordered by Constitution Avenue on the lake's northern side and the radiating Kings and Commonwealth Avenues which cross the lake. National institutions lining the southern lake shore include the National Library, High Court and National Gallery. Beyond them, along the land axis, stand Old Parliament House and Parliament House.

Griffin's composition forms only a small part of the view from Mt Ainslie. The lookout also takes in 'greater' Canberra. There are garden suburbs designed by the Federal Capital Commission during the 1920s, the vast network of neighbourhoods and new towns constructed from the 1960s by the National Capital Development Commission and later development extending Canberra to the borders of the ACT. The view south, across Campbell and Kings Avenue Bridge, takes in several interwar suburbs in south Canberra, rising in social status from the workers’ estate of Causeway at Kingston (now a foreshore redevelopment), to the affluent suburbs of Forrest and Red Hill on the slopes of Red Hill, which forms the long ridge in the middle distance.

Views west and northwest show Civic's tall buildings, inner northern suburbs and Black Mountain, with metropolitan Belconnen beyond. Belconnen was the second town designed by the NCDC in 1966, as the north western 'arm' of the Y-Plan. The results of generations of tree planting and private gardening are also evident. Within this vast urban forest the green belt of Haig Park can be clearly seen, marking the northern edge of Civic. Charles Weston, the first Superintendent of Parks and Gardens, laid out Haig Park as a 'shelter break' in the 1920s, planting pines, cypress and deciduous trees in rows. The park protected Canberra from the severe cold and the hot and dusty winds; it formed the capital's northern boundary for nearly 40 years.

Time to get there:
16 minutes from the Visitors Centre