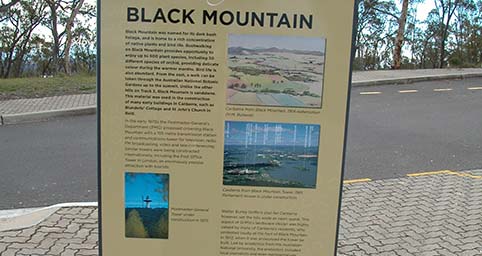 Even for local residents, the tower on Black Mountain is an orientation point to get your bearings.

Surveyor Robert Hoddle worked in the region and in 1832 wrote 'Black Hill' under his sketches of Black Mountain and O'Connor Ridge because both were burnt as part of the local Aboriginals' land management practices. This name stuck for Black Mountain .

In 1965 there were barbeques to be enjoyed as the new Lake Burley Griffin filled. (Photo courtesy National Library of Australia) The main view from this picnic area (now devoid of barbeques) travels along the lake eastwards towards Queanbeyan in NSW. 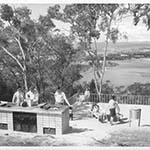 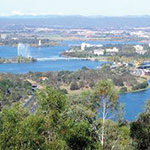 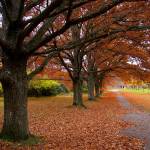 From National Capital Exhibition and Visitors Centre, turn onto Barrine Drive and follow it along the lake's edge under the bridge. Turn right to come back onto Commonwealth Avenue. Take the first exit left onto Parkes Way. After the tunnel, veer left then turn right onto Clunies Ross Street. Follow the sign left up Black Mountain Drive.

When standing on Black Mountain, you are at the western terminus of Griffin's water axis running through the Molonglo floodplain – now Lake Burley Griffin. Griffin's plan set aside the hills as open space, including Black Mountain and Mt Ainslie. They are both nature reserves in Canberra Nature Park, with regrown woodland and abundant bird life. You can also see the Jerrabomberra Wetlands at the eastern end of the lake. This important conservation reserve is the ACT's largest wetland, where 77 species of waterbird have been recorded.

Canberra's residents highly valued Griffin's landscape design, and protested loudly when the Government decided to build a telecommunications tower on Black Mountain. Academics from the Australian National University, at the foot of the mountain, led Canberra's first large environmental protest. All in vain, as construction went ahead in 1973. As the city's tallest landmark, 195 metres above the summit, the Telstra Tower now helps to orient travellers from all parts of Canberra, and offers sweeping views to visitors.

The main view travels along the lake towards the city of Queanbeyan in NSW, punctuated by the water spout of the Captain Cook Memorial and the National Carillon. You can see many features of central Canberra, including Civic and Russell, and institutions such as the Australian National University (immediately below) and the National Museum of Australia on Acton Peninsula, once the site of Canberry homestead. Key features of the landscape design are also evident. Tree planting around the lake started in 1959 when the 2,000 foot contour was established as the lake boundary. The lake was filled in 1964, more than half a century after its depiction in Marion Mahony Griffin's drawings as a central feature of the federal city.

On the lower slopes of Black Mountain, the Australian National Botanic Gardens displays the world's greatest living collection of Australian plants. Lindsay Pryor, Superintendent of Parks and Gardens, planted the first trees in 1948. The concept was very different to the older botanic gardens, which displayed exotic plants. The national gardens were established to showcase a scientific collection of Australian species as completely as possible. The gardens opened to the public in 1967 and now contain more than 6,800 species from all parts of Australia.