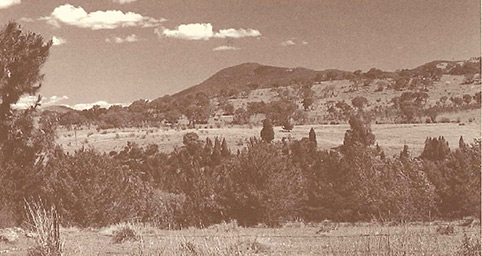 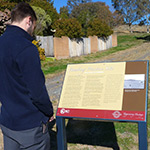 From Tuggeranong Homestead continue west on Johnston Drive, turn right onto Drakeford Drive, then first left into Hurtle Avenue. Take the 3rd street left into Ebenezer. Near No.41 is an entry to Stranger Hill reserve.

From the Visitors Centre drive south over Commonwealth Bridge, around Parliament House then take the left turn after the Royal Australian Mint exit onto the Cotter Road overpass. Turn left onto Tuggeranong Parkway and remain on this road for 14.5 km. Turn right into Hurtle Avenue.

This site played a role in Australia's world wars.

Local farmer Merv Edlington reported: 'By gee, I had to duck one day. A plane came so low that I got covered with leaves off the tree I was under. The wing of the plane chopped them off. The horse Iíd been riding took off and took a week to catch!'

During World War I, there were plans afoot in 1915 to build an arsenal here in the Tuggeranong Valley. A single track railway line was planned linking the arsenal to the Tuggeranong siding. This siding can be visited on the Tuggeranong Heritage Track. (see Railway Border).

At the time, it was considered the national capital was sufficiently isolated from invasion to safely concentrate the nationís arms development and manufacturing.  The armaments factory was to have a complete town with facilities for a population of staff and their families of 4,000. Tuggeranong Homestead was to be the administration centre. World War I ended in 1918 and by 1919 the whole arsenal project was abandoned.