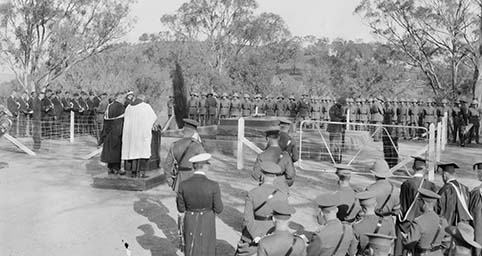 The interment of General Bridges in 1915 at Mt Pleasant, Duntroon. (Photo courtesy of National Archives of Australia) Two Aleppo pines, progeny of the famous "Lone Pine" from Gallipoli, were planted near the gravesite in 1993. They acknowledges the service of 71 Royal Military College graduates who served at Gallipoli. 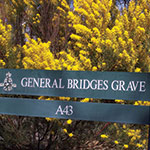 From the Canberra and Region Visitors Centre, return north on Northbourne Avenue and take the second exit left onto Parkes Way east. In 1km turn left at the roundabout onto Anzac Parade and at the end turn right onto Fairbairn Avenue. In 2.5km turn right into the 'gun gates' and follow directions to Mt Pleasant summit. The grave is on the left.

From St John's Church, turn left from Constitution Avenue onto Anzac Parade. At the roundabout infront of the Australian War Memorial, turn right, then right again through the 'gun gates'.

General Bridges' grave is on the left just before reaching the summit of Mt Pleasant. He was the first Commandant of the Royal Military College. Walter Burley Griffin's only piece of design in Canberra is the memorial stone on Sir William Bridges' grave.

General Bridges led the First Division of the Australian Infantry Forces at the Gallipoli landing on 25 April 1915. He died of wounds on 18 May 1915, being the first general killed in action in Turkey. His was the only identified body to be repatriated during WWI and his funeral was held at St John's on 3 September 1915. This site is the only consecrated grave on Australian Defence Force property.

The site also has a memorial to General Bridges' horse, Sandy, the only horse to return to Australia out of 169,000 chargers that left for World War I. Sandy's head can be found at the War Memorial.