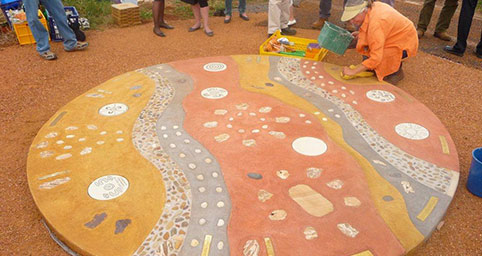 Local Aboriginal people have been involved with the design and artworks on site, which reflect the colours of the ochres. Gubur Dhaura is a success story, where a site of Aboriginal cultural significance has been exempt from suburban development and made into a wonderful community park with artful interpretation to reveal the layers of history. 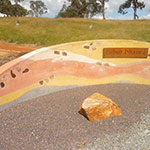 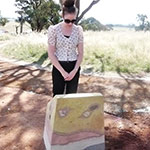 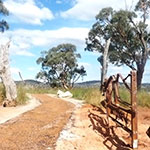 From Gungaderra go straight at the traffic lights into Manning Clark Crescent. Take the first right into Henry Kendall and the first left into Diane Barwick Street.

Gubur Dhaura is the Ngunnawal name for ‘ochre ground’. In the past the Ngunnawal people invited other tribal groups here to acquire ochre for ceremonies, trade and other purposes.

Early European settlers were also drawn here for its geological features, namely iron ore, gold and kaolin (pipeclay). The kaolin was extracted for local whitewashing of houses and used by the Canberra Brickworks.

The site, which covers about 6 hectares, is elevated giving a scenic vista that allows a visual panorama of all major mountains and mountain ranges in the Gungahlin basin. The site also forms an integral part of the cultural significance to the Ngunnawal people.