As you can see, virtually nothing remains of the Athllon property, except for a gate post (below). 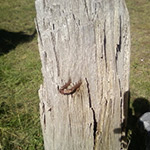 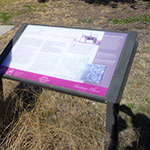 From the Visitors Centre continue south over Commonwealth Bridge. Take Capital Circle around Parliament House, turn left into Canberra Avenue for 4 km. Turn right onto the Monaro Highway. Turn right into Isabella Drive and right into Coyne Street, left into Bugden Avenue, past the Fadden Pines then right into Castleton Crescent. The sign is near the Scout Hall.

In the early 20th century the area was open scrub paddocks, dotted with homesteads, grasslands and Yellow Box eucalypt trees.

The Athllon Homestead was most likely on the nearby ovals. The earlier timber structure was burnt down during bushfires in 1952 and its replacement demolished when Tuggeranong's suburbs were established.

Athllon Homestead was an Oldfield property. The Oldfield family have extended roots in the ACT area stretching back over 160 years. Joseph Matthew Oldfield arrived in 1834 as an assigned convict to the Lanyon property. A bootmaker and station hand, he received his ticket of leave in 1842 and settled in the district raising a large family and beginning the Oldfield connection to the Canberra region.

The family increased their original holding to approximately 680 hectares covering the suburbs of Wanniassa, Monash and Fadden. Harry Oldfield, one of six children, was born at the Athllon Homestead in 1912. Like his siblings, he had many chores on the farm. Transporting water from the nearby creek to the homestead was one of his allocated jobs. Harry was 94 when an oral history was recorded in 2006. His history includes many insights into growing up at Athllon, attending Tuggeranong School and people who crossed his path.