One of the signs at the De Salis Cemetery behind Cuppacumbalong on the banks of the Murrumbidgee River. 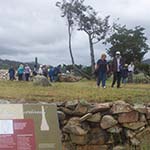 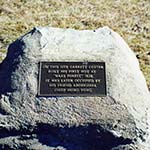 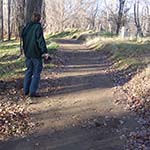 From Queanbeyan Riverside Cemetery, drive past the hospital and turn left onto Crawford Street then right into Monaro Street. After 10 km turn left at the roundabout onto Lanyon Drive. At the end, turn left onto the Monaro Highway and right onto Tharwa Drive. Lanyon is on your left once you have passed through the suburb of Banks. Continue to Tharwa Bridge for the other sites of interest here.

From the Canberra and Region Visitors Centre continue south down Commonwealth Avenue and cross over the bridge, around Parliament House. Take the left turn after the Royal Australian Mint exit onto the Cotter Road overpass. Turn left onto Tuggeranong Parkway and remain on this road (with its various name changes) through to Tharwa.

Lanyon: Lanyon was 24 kilometres from the cemetery in Queanbeyan - a day's journey on a dirt road. In the Australian summer, such a trip for a burial was not an option. When William Wright, brother of James who established the Lanyon estate, died on 3 January 1837 from injuries sustained in a shooting expedition, was buried near the Lanyon Homestead and his grave piled with rocks to deter dingoes from unearthing the coffin. This initial burial acted as a catalyst for the establishment of a private cemetery to serve both the landowner family and employees at the property. It includes 35 burials.

Onyong: Burial customs among the Aboriginal people who occupied the district varied between distinct groups and different means of burial were followed when deaths occurred in different areas. Onyong is still honoured among local Aboriginal families as a warrior and leader of the mid 1800s. He was buried in accordance with Aboriginal custom on a hillside near Tharwa Village with his spear and nulla nulla (hunting stick).

The track that leads in the direction to the burial site begins under the bridge and heads northwards. Download the Murrumbidgee River Corridor (MRC) brochure from the Territory and Municipal Services Directorate's website below.

De Salis cemetery: A map from the MRC brochure shows the route upstream from the bridge (south) to the unique 19th century cemetery next to the Cuppacumbalong property. The flat track is 2.8 km return.

The tradition of private cemeteries on properties persisted during the 19th century. As well as Lanyon, this De Salis site is a good example of such burial places. Under the occupancy of the De Salis family, the Cuppacumbalong property saw the creation of a large and imposing feature on the banks of the river. To overcome the flooding river, which had carried away three coffins and the granite, making digging impossible, soil was brought in to raise up the ground for burial.

There are 19 recorded burials between 1876 and 1903, marked by four headstones and the De Salis polished granite obelisk.